Thank you for participating in the 2016 Multimodal Transportation Plan update! Without YOU this plan update would not have been possible.

The 2016 Multimodal Transportation Plan update was adopted by City Council on Tuesday, March 7, 2017. The final draft of the plan was taken to City Council during a Study Session on Tuesday, December 13, 2016. The public comment period for the draft plan closed on October 31, 2016.

The Plan prioritizes over 450 projects, with a grand total project cost of over $160 million. The following infographic provides a snapshot of the 2016 plan update. 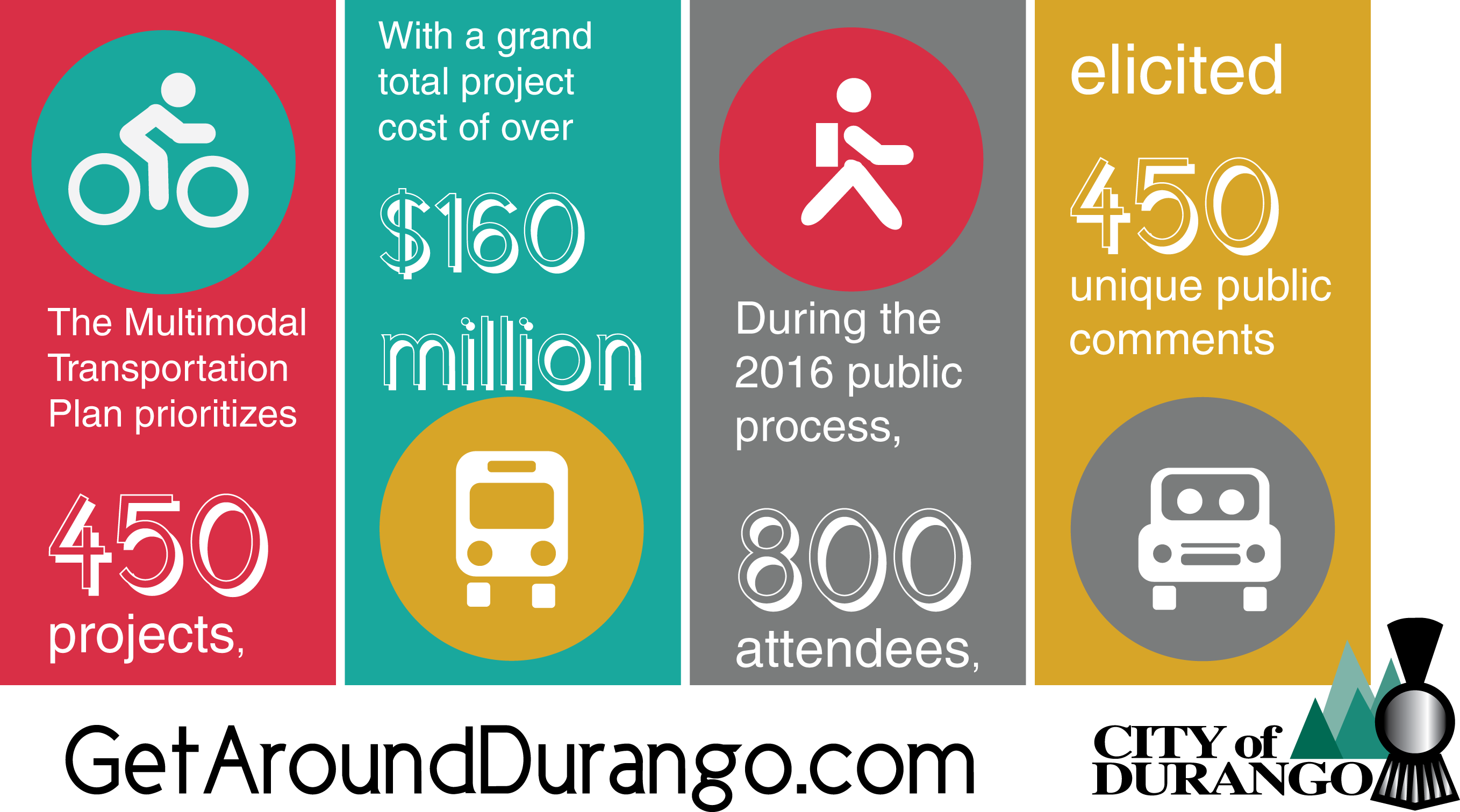 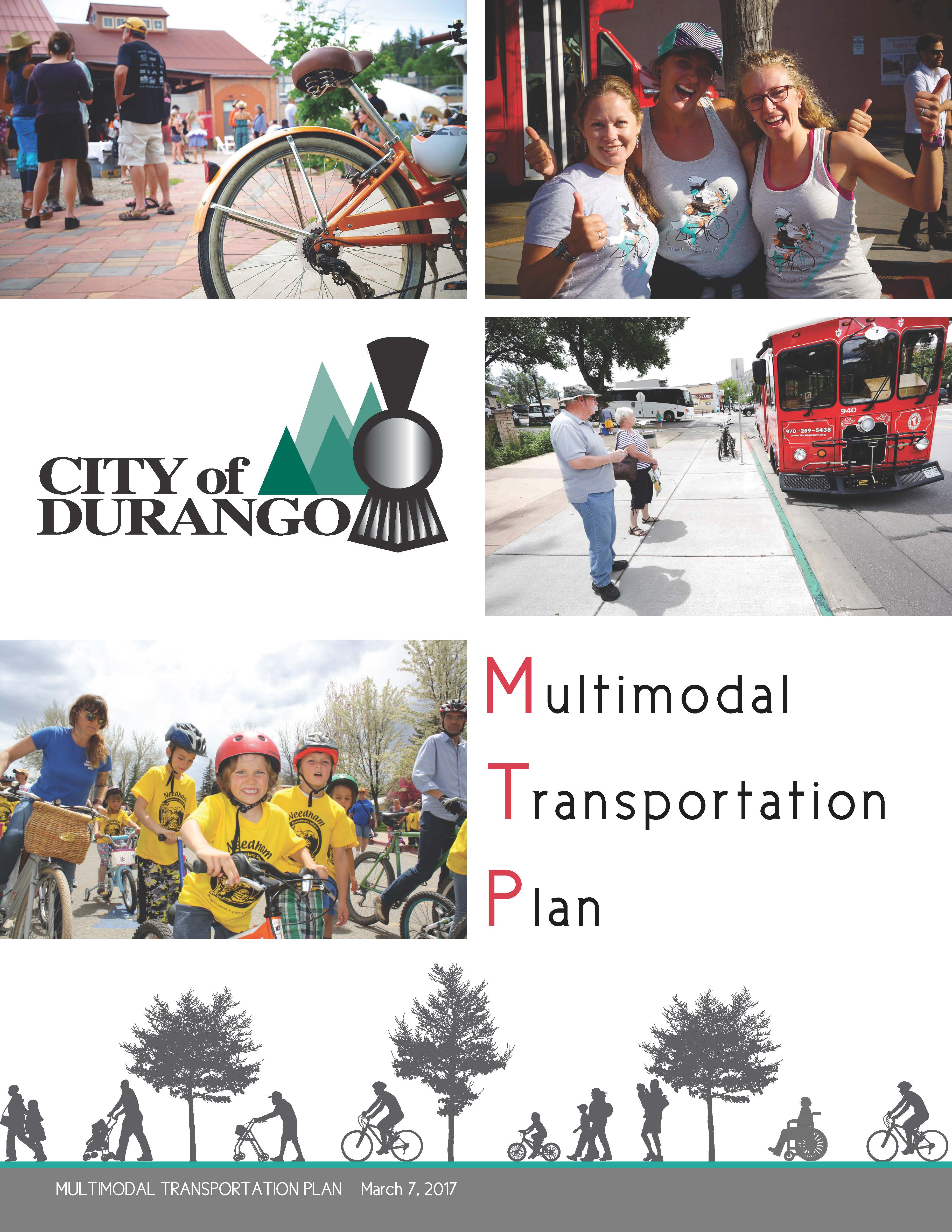 Appendix A. Land Use and Development Code, Chapter 4 (PDF)

The City of Durango's Multimodal Transportation Plan guides the implementation of projects to move Durango towards an integrated multimodal transportation network. The Plan's transportation policy focuses on moving people, rather than just moving automobiles. The vision of the Plan is to create a fully-connected transportation network that provides for an outstanding transit, bicycling and walking community in Durango. A measure of achieving this vision is that a middle-school aged child is able to safely and conveniently access transit and bike or walk independently throughout Durango and its environs.

The City of Durango is in a unique position due to immense public and political support for transit, multimodal transportation, parking and sustainability. This broad-based community support allows for the implementation of innovative transportation processes and projects. Due in part to this support, the City adopted its first Multimodal Transportation Plan in 2012 and made the decision to undergo a plan update in 2016 to guide the implementation of prioritized projects and act as Durango's blueprint for connectivity, accessibility and mobility.

The purpose of the 2016 Multimodal Transportation Plan update is to ensure that the projects identified in the original 2012 Plan are current, update existing deficiencies, identify accomplished projects, and include a more refined transit, parking and accessibility analysis. The impetus behind updating a 4-year-old plan is to attain the Council's goal: "Demonstrate Government Performance, Objective 3.3 Improve City facilities to meet the needs of a growing community, action 3.3.7 Update Multimodal Transportation Plan."

The final document was updated based on feedback from City Council during the draft plan period and the City Council Study Session on December 13, 2016. Completion of the Plan update provides a guiding, living document for prioritizing multimodal transportation projects and information for educational materials.

The public engagement process details the Plan's strategy for engaging the community. Like the original Multimodal Transportation Plan, the public process for the 2016 update was very comprehensive and the Multimodal Advisory Board acted as the Plan's steering committee. The process began with a kick-off meeting followed by 12 public meetings, of which the large majority were very well-attended (highest attendance was 63 people at the May 23rd meeting).

The public process for the Plan included targeted outreach in an effort to engage all facets of the community. During public meetings, attendees were encouraged to openly give input and be a part of the project prioritization process. The 2016 meetings received over 800 attendees, and elicited over 450 unique public comments. In addition, a Virtual City Hall survey was used during the month of June 2016 to collect public comment. The survey garnered 207 visitors and 159 responses.

See the list of projects (PDF) proposed in the Multi Modal Transportation Master Plan, along with estimated costs.

Read how we are implementing this plan

The public process for the 2012 Multi Modal Transportation Master Plan began in 2009 with a kick-off meeting, followed by seven neighborhood meetings, and additional public outreach meetings. In total, over 75 meetings were held.

Why the Multimodal Transportation Plan?

Another reason we were determined to complete the plan was to ensure a high quality of life for all of the residents and visitors of Durango. Research has shown that places that are friendly to all mode users provide a much higher quality of life than those that are focused primarily on the automobile.