We envision a community where art is expected.

The City of Durango's public art program is administered by the Creative Economy Commission  (CEC). 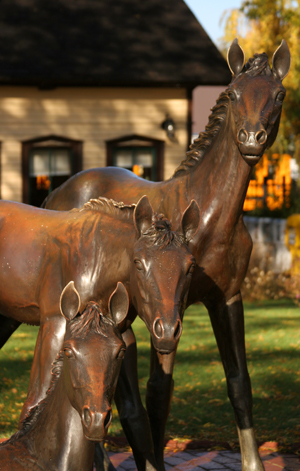 Why is Public Art Important?

Public art contributes to a city's visual character, texture, and history. In Durango, it is an essential part of our identity, history, and cultural heritage. Public art contributes to our economic base and enhances the public appreciation of art. Incorporating visual art into our communal spaces fosters our sense of community and challenges us to engage in a meaningful way. We invite you to experience Durango's Public Art.

Want to take a tour of the City's Collection?

Common Threads- A public art piece created by the community!

The City of Durango received an Artworks Grant from the National Endowment for the Arts. This grant catalyzed a community art project for the 550/160 medians. The piece is called Common Threads. To learn more about the project and get involved go to Durango Common Threads.

As a part of the Durango District Initiative, the City of Durango is offering up to $5,000 for creative, community-based projects in the City's Character District areas.  The City's Creative Economy Commission reviews and awards these grants. Learn more about Durango Creates (PDF).

Economic Impact of Arts and Culture in Durango

According to a study by the Americans for the Arts, Durango's non-profit and public arts and cultural organizations contributed $18.1 million to the local economy in 2015! The City of Durango, Community Concert Hall at Fort Lewis, Durango Arts Center, Durango Chorale Society and STEAM Park funded the Americans for the Arts' Arts & Economic Prosperity 5 Report. This study analyzes the economic impact non-profit and public arts and cultural organizations have on the City of Durango. Twenty-six of the eligible 34 arts organizations participated in the study. Read the full report (PDF)

The Creative District program began in 2011 through Colorado Creative Industries. Since the inception of the program, they have helped support and certify numerous Creative Districts throughout the state. Along with supporting artists, cultural organizations, and creative enterprises the formation of a Creative District is an economic driver and diversifies the economy while supporting creative professionals.

Having a certified Creative District in Durango will benefit the community in numerous ways, including increased marketing for Arts & Culture in Durango, a consolidated directory of creatives/events in the area, greater partnerships with other Creative Districts, the ability to leverage our status for large national grants, and greater cohesion among the creative community in Durango.

In 2020, the Creative Economy Commission (CEC) gave the Durango Art Brigade (under the Durango Creative District (DCD) umbrella) $3,000 to install some temporary/pop-up art projects throughout the City of Durango during the COVID pandemic.  The goal of this program was to promote economic recovery and resiliency .  This program has proven to be very successful, so for 2021 the CEC has set aside an additional $7,500 for this program to continue.  Rocky Mountain PBS heard what Durango was doing and put together a short article and video about this program.